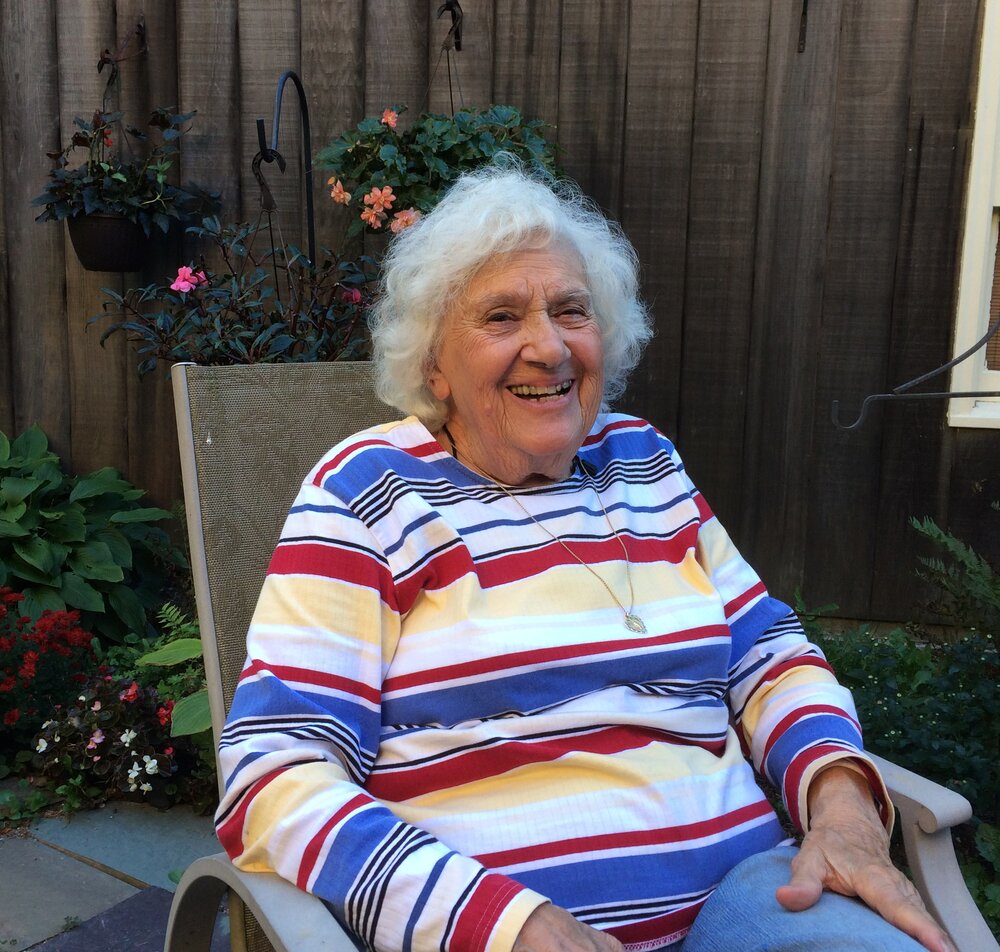 Margaret Joan Gilday died on January 19 in Belmont, Massachusetts, at the age of 97.

Margaret was born in New York City on August 6, 1925, to Nicholas and Helen Feretich, immigrants from Croatia.  The family lived in a tenement apartment on 9th Avenue, in what is now the heart of the Chelsea neighborhood. Her mother Helen worked until retirement at the Horn & Hardart Baking Company. Her father Nicholas worked until retirement for the New York Central Railroad as a barge captain on the Hudson River.

Margaret went to high school at St. Columba Catholic School in Manhattan, and graduated from the College of Mount Saint Vincent. She grew up bilingual, speaking Croatian at home and English at school. When she was just nine years old, her older brother Johnny died of leukemia. This was a loss from which her mother never quite recovered.

On August 14, 1948, she married John Francis Gilday, the son of Irish immigrants who lived in the neighborhood. After John returned from service in the Korean War, the couple moved to Albany where John took a position as a civil engineer for the State of New York Department of Transportation. Margaret put her teaching career on hold to raise children.  When the family outgrew their Albany apartment, they bought land in Delmar, NY where John designed a house and built it with the help of Margaret’s father Nicholas. That house eventually filled up with seven children.

At the age of 51, inspired by her son John’s reading disability, Margaret returned to university to earn a master’s degree in Special Education. Upon graduating, she returned to work that she loved, teaching reading to children in the Albany public schools and in Catholic schools.

Margaret was a devout Catholic who for decades attended daily mass at St. Thomas the Apostle Church in Delmar, and later at St. James Church and others in Albany. She thrived on being with family and with her enormous circle of friends of all ages. She passionately devoted herself to her interests: swimming, gardening, daily church, bridge club, camping, and cross-country skiing. She loved to be outdoors in her vegetable garden, constantly experimenting with new crops. She possessed boundless curiosity and was driven by a desire always to learn and try new things. She also loved to travel, and in her late 80’s she made a pilgrimage to a holy site in Medjugorje, Bosnia.

She treasured her personal independence and continued living in her house (and driving her car!) well into her 90’s.

A beloved and devoted wife, mother and grandmother, she was preceded in death by her husband John and her eldest daughter Maggie.  She is survived by her daughters Nancy and Jeanne; her sons Joseph, Kevin, John and Michael Peter; thirteen grandchildren and five great-grandchildren.

A Mass of Christian Burial will be celebrated 10:00am on Saturday January 28, 2023 at St Thomas the Apostle Church, 35 Adams Place, Delmar, NY. The family will receive visitors at the church 9:00am prior to the Mass.  Interment will be in Calvary Cemetery, Glenmont.

To send flowers to the family or plant a tree in memory of Margaret Gilday, please visit Tribute Store
Print
Saturday
28
January