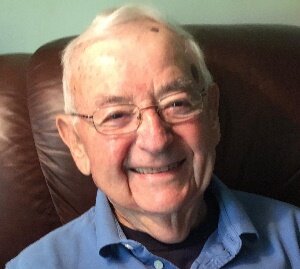 Jack was born in Babylon, New York on 17 June 1927, the fifth of six children of William Canning and Gertrude Keogh.  He enjoyed a Roman Catholic primary education in the Washington Heights neighborhood of Manhattan and later attended secondary school in Queens, New York.  He earned his GED, high school equivalency diploma, later in life.

Jack enlisted in the US Army infantry in 1945, shortly before the end of World War II.  He served in Berlin where we supported the American occupation forces after the war.  Returning from the war, he studied photography and worked at American Metal Company in lower Manhattan where he met his future wife, Florence Cottone.

Jack and Florence settled on Long Island and raised four children.  Jack worked for a manufacturing company supporting the aeronautics and defense industry and later applied those skills at larger international engineering and construction companies including United Engineers and Bechtel Corporation.

With two children in college and two still at home, Jack and Florence moved to Schoharie, New York in 1974.  They made a 19th century saltbox house overlooking Schoharie Valley their home for more than thirty years.

Jack and Florence were particularly proud of their children, each one earning higher education degrees.  He was a devoted and active member of several Roman Catholic parishes during his life and most recently contributed to Saint Thomas the Apostle in Delmar, NY where he read scripture at Sunday mass for several years.  Jack’s faith was based on a deep commitment to community service with a focus on social justice causes including Fair Housing, AIDS care, and ministering to the incarcerated.  He was among the founders of the Habitat for Humanity Chapter of Schoharie County.

Relatives and friends are invited to call on Thursday, December 1 from 5:00 to 7:00 p.m. at Applebee Funeral Home, 403 Kenwood Avenue, Delmar.

A Funeral Mass will be celebrated on Friday, December 2 at 9:00 a.m. at St. Thomas the Apostle Church, 35 Adams Pl., Delmar.  Burial will be in Calvary Cemetery, Glenmont.

Flowers are welcome and should be sent to Applebee Funeral Home.  Donations are encouraged in Jack’s memory to Habitat for Humanity or for the causes that Jack supported.

To send flowers to the family or plant a tree in memory of John Canning, please visit Tribute Store
Print
Thursday
1
December