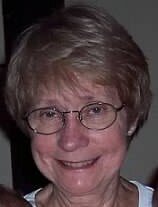 Born November 13, 1932, in Brooklyn, NY, she was the daughter of the late Arthur Akerstrom and Helen (Beary) Akerstrom.  Janet was a graduate of the Vincentian Institute, Russell Sage College, the College of St. Rose, and the University of Albany where she received her master’s degree in Fine Arts.

Janet and George were lifelong residents of, and raised their family in, Delmar.  Janet loved Lake George and returned to spend every summer with her children’s families on Pilot Knob, creating lasting memories for her grandchildren.

Janet was an accomplished artist and while she did not start painting until her children were grown, her art collection adorns the walls of her children’s, grandchildren’s, friends’ homes and offices and her paintings remain some of the most cherished gifts from Janet.  Janet loved spending time in her studio with her grandchildren helping them create their own works of art and proudly displaying them on her walls.

In lieu of flowers the family requests that you donate to a charity of your choice in Janet’s name.

To send flowers to the family or plant a tree in memory of Janet Smith, please visit Tribute Store
Print
Sunday
31
July