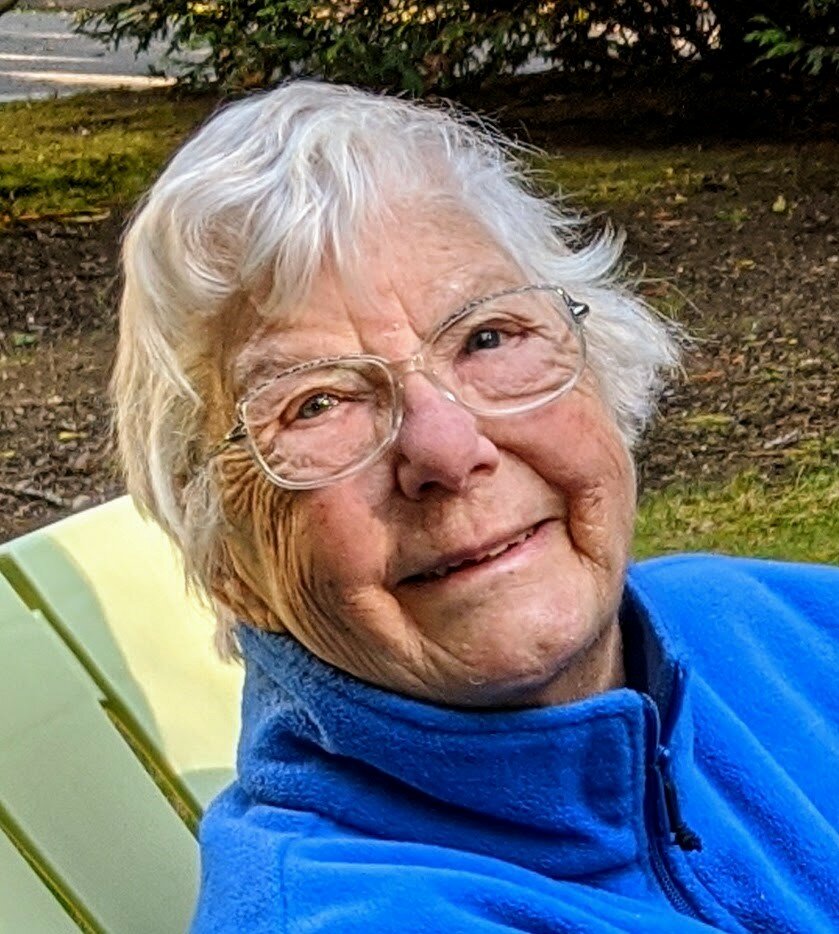 Alice was well liked for her ready sweet smile, kindness, and immediate acceptance of and respect for others. She exuded warmth. She was good at living in the moment and having fun, with a quick wit, a love of games and puzzles, and an appreciation of small things.

A child of the Great Depression, she was thrifty but also generous. She was hardworking and strong, mowing her sizable lawn into her early nineties and hoisting her husband’s wheelchair into the station wagon until his death in her mid-eighties. She was ever flexible, facing each new situation with resourcefulness and a can-do attitude. Even in her last years, in dementia, she remained positive, happy, and serene.

Born in Tulsa, Oklahoma, she followed her parents’ footsteps to Oberlin College, graduating in 1948 with a major in English Literature. There, she met the love of her life, Harry Howes, when she was president of the YWCA college chapter and he was president of the corresponding YMCA. After college, he went to China and India for three years while she worked on recreational programs at the YWCA in Minneapolis and then returned to Tulsa and worked as a secretary, enjoying living with her beloved parents, Harold and Clara Spore, sister Janet Slater, and nephew John.  Alice valued her independent time and encouraged her daughters to know they could support themselves.

Alice and Harry married in 1952 and moved to Illinois, where he pursued a Master’s and Doctorate in Education at Northwestern and she  supported them, working first at the university and then as a secretary for a pathologist. They enjoyed daily picnic lunches on the shores of Lake Michigan. They moved to Albany when he took a job as a guidance counselor at Milne School. She had the first of their four children and became a full-time mother and homemaker. They moved to Delmar in 1956, then Slingerlands in 1966.

Alice’s organizational skills, creativity, sense of humor, and can-do attitude were key to lots of family fun, including camping, hiking, cross-country road trips to visit family in Tulsa and Vancouver, Canada, and two years living abroad. Harry earned a PhD and was a professor at SUNYA where Alice served a term as president of the Faculty Wives club 1970-71. Most semesters, Alice hosted Harry’s graduate students at their home, baking dozens of cookies to serve. They also welcomed many international students into their home, especially on holidays. For Harry’s first sabbatical year, 1964-65, he took the family to Allahabad, India. Alice took this in stride and managed the daily details of life and travel with four children aged 3 to 9 plus her mother-in-law, who had been born in India and was delighted to revisit. In another sabbatical year, 1971-72, the family spent three months in Cotabato, the Philippines, and six months in Bangalore, India. Both times they traveled home through Europe, camping much of the time. Her international packing skills were second to none.

Alice and Harry spent two more years in India after he retired. They both worked at Woodstock School in the foothills of the Himalayas, and traveled home through China. At home, they enjoyed ElderHostel programs, road and train trips across the U.S., and visiting their children’s families.

They were both active in church – for many years at the First Congregational Church in Albany, and then at Slingerlands Community Methodist Church, where Alice worked as secretary for many years. Most recently Alice attended the First Reformed Church of Schenectady.  They both served in the Capital Area Council of Churches.

They had lots of friends through church, SUNYA and the community. Alice was a member of many bridge groups, some with Harry, and with Harry and a group of friends enjoyed their Gourmet Travel Club.

Alice took great care of Harry at home for his last seven years while he had dementia. Every bit of her creativity, ingenuity, love, and good cheer was called for during that time. In the last three years she has lived with her daughter Sarah and Sarah’s husband Bill Buell, and they have extended the same loving care to her. She lit up a room with her warmth and beautiful smile through her last day, which included a perfect afternoon on the screened porch, surrounded by loved ones.

A memorial service will be held at the First Reformed Church of Schenectady on Saturday, September 3, at 4:00 pm.

In lieu of flowers, the family suggests a donation to the Mohawk Hudson Land Conservancy, the National Audubon Society, or the charity of your choice.

To send flowers to the family or plant a tree in memory of Alice Howes, please visit Tribute Store
Print
Saturday
3
September