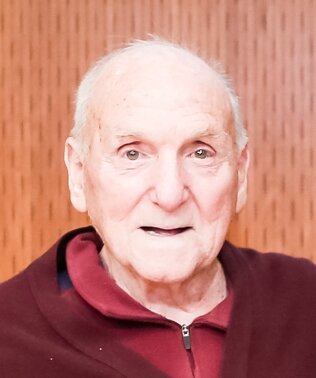 Peter Fiore, age 91, passed away peacefully on May 31, 2022.  He is survived by his beloved wife of 70 years, Sylvia, his son Chris and wife Helen, his son John and wife Julia, and his grandchildren, great-grand children, nieces and nephews.  He is predeceased by his parents, John and Anna, and his two older brothers, Nicholas and John.

Peter was born in the Bronx on December 20, 1930.  At age 18, he enlisted in the United States Air Force and was deployed to a base in Texas.  After returning to the Bronx, he began dating Sylvia Scrofani, the love his life, and they were married on September 16, 1951.  Since Peter was not yet 21 at the time, his dad had to sign the application for his marriage license on his behalf.

Peter always had a fascination with electronics and he opened a television repair business, Pete’s TV Clinic, which he operated for 30 years.  As a young man he was an avid golfer, bowler and skier.  He enjoyed taking long road trips with his family and traveled all around the country.  In 1998 he moved to the Capital District and joined the Italian American Community Center in Albany shortly thereafter.  There, he made many friends and found that he enjoyed bocce and trips to the casino.

Peter loved animals, and he especially loved to put out food for the birds and squirrels and watch them eat from his window. He was a huge Dr. Pol enthusiast.

We would like to offer our sincere thanks to the staff of Teresian House in Albany for helping Peter through his final days and for the tremendous support they provided to his family.   We would like to offer a special thanks to Peter’s dedicated caregiver, Jodi, who looked after him with care and compassion for almost three years.

Visitation for friends and family will be held at Applebee Funeral Home, 403 Kenwood Avenue, Delmar, New York, on Saturday, August 27, 2022, at 11:00 AM.  A memorial service will be held at 1:00 PM, immediately following visitation.

In lieu of flowers, donations may be made to the Ayres Memorial Animal Shelter, 133 Hilltop Rd, Sprakers, NY 12166.

To send flowers to the family or plant a tree in memory of Peter Fiore, please visit Tribute Store
Print
Saturday
27
August