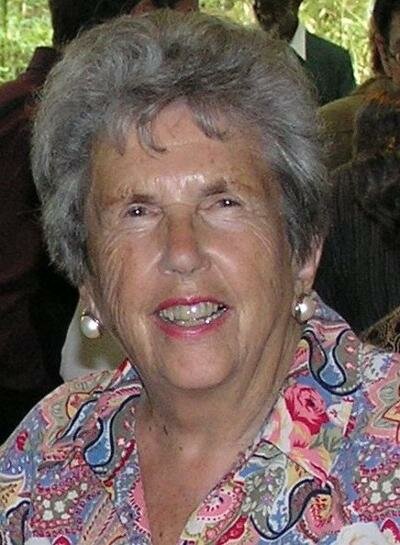 Mary Hervey Johnston, 97, passed away peacefully, surrounded by family, at her home in Delmar on Monday, May 30, 2022. She was born on August 17, 1924 in Marietta, Ohio to Ida C. Hervey and John D. Hervey, a county agricultural agent and an educator. She graduated from Atherton High School for Girls in Louisville, Kentucky in 1943 and attended the University of Louisville before completing her undergraduate education at the University of Maryland in 1947, after her family moved to Alexandria, Virginia.

It was in Louisville where she met Philip Rollin Johnston, who was stationed there with the Navy. Although they were temporarily separated when he was posted to California, Phil was able to return to the east coast to be closer to Mary. They were married on April 5, 1947 in Alexandria, Virginia. They just celebrated their 75th anniversary.

After their wedding, Mary and Phil moved to Westerville, Ohio where she taught at Ohio Wesleyan University while Phil attended Otterbein College. They moved to Boston in 1948 where Mary taught at the Newton High School in Newton, Massachusetts while Phil completed graduate work at Boston University. They then moved to Syracuse in 1950, then to Albany in 1953 and settled in Delmar in 1956.

In addition to teaching, Mary was a master quilter, using her artistic skills to create award-winning designs. One of her quilts won a blue ribbon at the New York State Fair. She made quilts for family, friends and for the First United Methodist Church of Delmar bazaar. She was an avid cook, sewer and gardener. She also loved to travel and with Phil went throughout the US and abroad. For many years after retirement, Mary and Phil spent the winters in Florida and summers sailing on Lake George. She also greatly enjoyed her time at the family’s cabin in Bar Harbor, Maine.

Mary is preceded in death by her parents, her daughter Kathryn Johnston, her brothers Marshall Hervey, Cameron Hervey, and Lawrence Hervey, and her sister, Sara Watts.

She is survived by her husband of 75 years, her son David Johnston and wife Linda of Houston, Texas, her daughter Laurie Schimmelfing and husband Reed of Northampton, Massachusetts and her son, Douglas Johnston and wife Susan of Syracuse, New York; as well as eight grandchildren and six great-grandchildren.

The family would like to express deep appreciation to Clara Jusino, Mary’s caregiver in the last few months of her life.  The family also thanks The Community Hospice of Albany for their support during Mary’s last days.

In lieu of flowers, please make a donation to The Community Hospice of Albany.

A celebration of Mary’s life will be held at the First United Methodist Church of Delmar on Kenwood Ave, Sunday, June 5th at 2:00 pm.