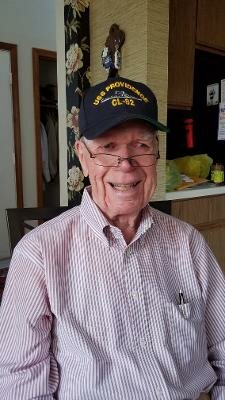 The only son of H. Gertrude (Fitzpatrick) Ritz and David J. Ritz, Sr., David was born on June 22, 1928 in Newburgh, New York.  He attended St. Mary’s Grammar School and graduated from Newburgh Free Academy, class of 1946.  He and 20 of his N.F.A. classmates had enlisted in the U.S. Navy and were all sent to Bainbridge for training.  After boot camp he was assigned to the USS Providence, FL 82, a light cruiser, part of the U.S. Sixth Fleet.  His tour of duty was spent patrolling the Mediterranean.

David attended Lafayette College, class of 1952, where he was a member of the Sigma-Nu Fraternity and the football and wrestling teams.

He was the president of Ritz Trucking Company and Woodin Transportation and was active for many years in both local and national trucking associations.  From the trucking business in the mid ‘70s he went to work for the NYS Dept. of Transportation where he was the Chief of Compliance and Enforcement in the Motor Carrier Services Division.  He retired from state service in 1994.

David was a long-time member and volunteer at St. Thomas the Apostle Church and School, participating in the Mens Club, ushering and collection counts.  He has dearly missed those connections in these Covid years.

Funeral services will be private with burial in St. John the Baptist Church Cemetery in Valatie, NY.