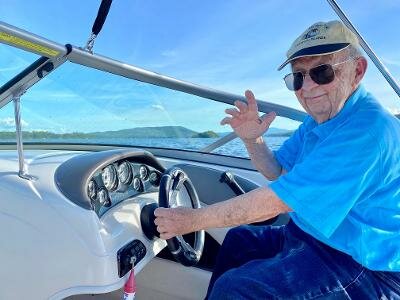 Prior to his retirement, Bill acted as sole proprietor of A.T. Zautner and sons, with more than 60 years in the building trade. He built over 200 custom designed homes in the greater Albany area and a custom Adirondack home on Lake George. Bill also successfully built and sold two general aviation aircraft and two custom wooden power boats. He enjoyed spending time with his family out on the water and the roar of his boats as he drove by turned every eye on Lake George. He enjoyed watching NASCAR with his family, building remote control model aircraft, model railroading and racing sail boats. An avid gardener, his rose garden drew great admiration, and his orchids at times took over the house! Bill’s day wasn’t complete without a bowl of ice cream or a milkshake. There was no home engineering problem that he couldn’t handle!

Per Bill’s wishes, there will be no funeral service.  In lieu of flowers, donations may be made in Bill’s name to the Albany Symphony (https://www.albanysymphony.com/giving) or the Lake George Association (https://lakegeorgeassociation.org/invest).