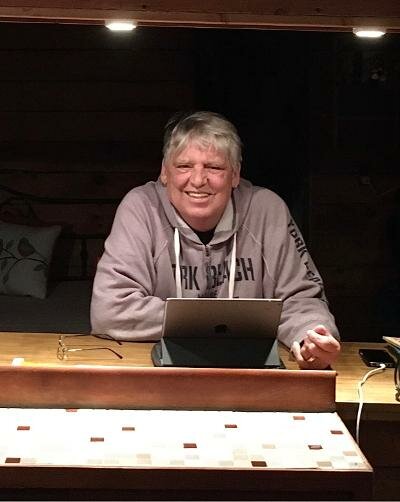 Jim Fryer passed peacefully on November 29, 2021, surrounded by his family.

Jim spent the summers of his youth on the shores of Great Sacandaga Lake with his Grandma and Grandpa Fryer. He enjoyed many summer days and holidays at the lake with his family throughout his life.

Jim was a 1973 graduate of Troy High School, where he was a lineman on the football team and a catcher on the baseball team. But it was his time as an AV tech in high school that planted the seeds for his lifelong career as a stagehand.

His first gigs were working ice shows at Rensselaer Polytechnic Institute (RPI) in Troy. From there, he truly learned what it was to be a stagehand from “Murph,” his mentor at the Palace Theater in Albany.

Jim was always a hard worker, often leaving after a night at the theater to begin his shift at Levonian’s meat packing plant. Friends would marvel at his ability to keep his incredible pace.

Jim was a strong advocate for workers’ rights and supported his fellow union members through his service as Levonian’s Shop Steward and negotiating union contracts for UFCW Local 1. He was also a member of IATSE Stagehand’s Union Local 14 (1988-2021) and Studio Mechanics Local 52 (1992-2021). He served as the president of Local 14 for 12 years.

Throughout his 30 years as a stagehand, he loved running the rail as a flyman in theater productions at The Palace (Albany) and Proctors (Schenectady), and as an electrician for shows ranging from AC/DC at the Knickerbocker (Pepsi) Arena to the New York City Ballet at Saratoga Performing Arts Center (SPAC). During breaks at the theater, you could find him grabbing his glasses and settling in with a crossword puzzle (just don’t stare over his shoulder and offer any answers!).

Jim’s stagehand credits include several movies, such as The Age of Innocence, A Place Beyond the Pines, and A League of Their Own. He also worked in NYC as an electrician for the full production of the television series The Americans.

Most of all, Jim loved spending time with family and friends. There were long summer days on Great Sacandaga Lake boating with his brother and family or floating on rafts near the dock. There were trips to northern New York to see his son perform in community theater productions, and countless family parties and backyard bonfires. He always took a moment to be thankful that he was surrounded by the people he loved (and who loved him right back!).

This year, Jim spent a brilliant summer with his wife, Karen, in their “Happy Place”— their cabin on Pine Lake. Family and friends, a counter and a crossword, and a beautiful lake view.

Jim is also survived by his Aunt Carol Borst and many cousins and extended family.

He was predeceased by his mother, Esther (Petty) Fryer, his father, Walter Fryer, and three infant brothers, William, Henry, and George.

Jim felt a strong connection to his brothers and sisters in the IATSE union and was deeply saddened when a union Brother was diagnosed with ALS. A GoFundMe page has been established for Eddie Cotugno.

In lieu of flowers, please consider a donation to help Eddie in his fight against ALS. We know that having a way, even now, to help one of his Brothers in need through your support would have meant so much to Jim and we extend our heartfelt thanks to you. Please add a note to designate your donation “In memory of Jim Fryer.”