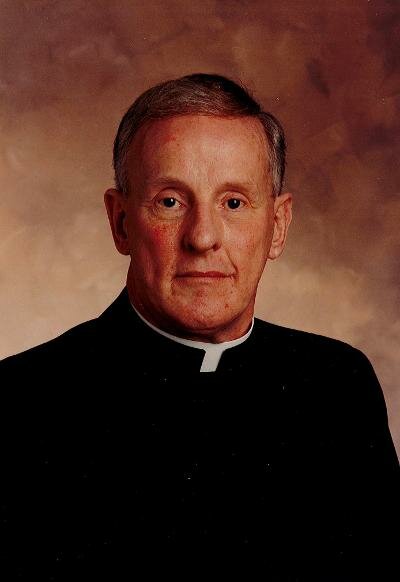 Born January 7, 1929 in Binghamton, NY, he was the son of the late Robert Joseph Donnelly and Grace Angela Clapper Donnelly.  Bob graduated from Binghamton Central High School in 1946 and received a BA from New York State College for Teachers in Albany in 1952.  A veteran of the U.S. Navy, he honorably served his country during the Korean War, attaining the rank of Lieutenant.  Following his military service, Bob received a Masters of Arts degree in Theatre from the Yale Drama School in 1962.  He worked summers in professional theatre and opera from 1959-1968 while teaching college theatre at Idaho State (1961), Dartmouth College (1962-1965), and the University at Albany from 1965 until his retirement in 1987.

It was at that time that Fr. Donnelly answered his call to ministry and entered St. Mary’s Seminary and University in Baltimore, MD, studying the priesthood from 1987-1991.  He was ordained in June 1991 at the Cathedral of the Immaculate Conception in Albany.  During his ministry, Fr. Donnelly served the parishes at St. Joseph’s, Schenectady; Holy Infancy, Lake Luzerne; St. Pius X, Loudonville; and St. Ann’s, Fort Ann; and served as Chaplain at Convent of Mercy and Villa Mary Immaculate in Albany.  He retired from active priestly ministry in June 2001.

Fr. Donnelly’s request was for a simple funeral mass.  Family members, close friends and priests are invited to attend his Mass of the Resurrection at 11 am on Friday, October 29, 2021 at Our Lady of the Assumption Church, 498 Watervliet-Shaker Rd., Latham. Due to COVID 19 restrictions, masks are required at Mass.  Burial will follow in Most Holy Redeemer Cemetery, Niskayuna.