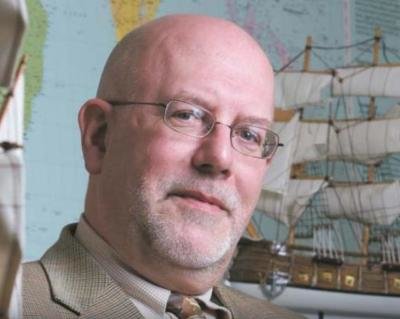 Kenneth J. Blume of Altamont, NY, passed away on April 9, 2021.  He was born in Brooklyn, NY, on August 5, 1948, to John Herman Blume Jr and Alice Eleanor Lee Blume. He is survived by his sister Nancy Lee Blume Brodsky, numerous cousins, and a multitude of friends.

Ken attended New York City public schools, including Lafayette High School, and graduated from Hamilton College in 1970, majoring in history and English.  At Hamilton, he forged lifelong friendships with both students and professors and honed the research, writing, and presentation skills that would serve him so well. There, too, he experienced the kind of student-centered teaching for which he is fondly remembered. While at Hamilton he had not one, but two Citroën DS cars—a campus record—and he enjoyed sharing the wonders of their aerodynamic, futuristic body design and hydropneumatic suspension with his eclectic circle of friends. He seldom missed a campus concert, theater performance, or art exhibit and, during school breaks, frequently entertained his college friends in his hometown, New York City. He favored the Algonquin Hotel. Each summer of his college years Ken worked in the offices of Moore and Shley, in Manhattan’s Financial District.

Ken earned a Ph.D. in history from Binghamton University. He was hired as an Assistant Professor at Albany College of Pharmacy and Health Sciences in 1988, promoted with tenure to Associate Professor in 1995, and promoted again to the highest faculty rank of Full Professor in 2002.  He retired in July 2019 from ACPHS after 31 years as Professor of History and Humanities, nine of those years as Department Chair.  While at ACPHS, Ken was a staunch advocate for the humanities.  His dedication is evident in the PharmD curriculum taskforce he chaired; the humanities course revisions he guided; the humanities courses he coordinated; the Department of Humanities and Communication he strengthened and chaired for many years; and in his enthusiasm for the twenty-nine different history, literature, and humanities courses he taught.  He was a committed advisor to hundreds of students.  Many of his students remained in contact with him after graduation.  Dr. Blume has had an impact on over 5000 graduates at the College. He was granted the title of Professor Emeritus upon retirement.

Ken’s scholarship found significant expression in all levels of publications: four books, 50 journal articles and encyclopedia entries, and 45 review essays.  He delivered 29 papers at conferences of the top American historical associations.  His service at the college included over a dozen faculty, administrator, and staff search committees; membership on all the major college committees, chairing many; and advisor to student organizations such as the college yearbook, student newspaper, and the professional pharmacy fraternity, Phi Delta Chi.  He began his career as advisor to the Alpha Theta Chapter of Phi Delta Chi in 1988, soon becoming a faculty brother. His Phi Del Brothers knew him as “Doc.” As department chair, he hired and mentored many of his faculty for over 20 years. We will remember fondly the whimsical touches such as Argyle Tuesdays and “le Petit Salon,” decorated with his latest finds from a dollar store.

Outside of teaching, Ken enjoyed attending summer performances at Glimmerglass Opera, cooking for friends, doting on his cats, and listening to classical music.  He enjoyed rural life in Altamont and especially liked hearing the spring peepers and pileated woodpeckers usher in spring.   Ken’s friends fondly remember the many newspaper articles he scanned for their benefit or sections of The New York Times he saved for them related to their individual interests.

In retirement, Ken taught part time at the college, and he continued his scholarly work.  Through 2020, he was editing an article that has been accepted for publication in The Journal of American-East Asian Relations.  He had begun research on three more books.

A memorial service will be held at a later date.  In lieu of flowers and donations, please listen to your favorite piece of classical music and think of Dr. Blume.