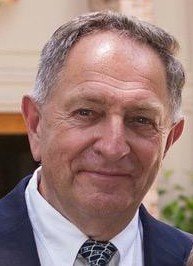 Richard Holmes Van Woert, Sr., “Dick” age 87, formerly of Delmar, passed away on Thursday October 31, 2019 at the Hospice Inn at St. Peter’s Hospital in Albany, NY after a lengthy battle with Alzheimer’s Disease.  He is a 1950 graduate of Bethlehem Central High School. In 1951, he and his Father started a general contracting business, Van Woert & Son, known for building homes of distinction in the Capital District area.  Dick was the co-founder of the Capital District’s Home Builders Association and built the first all-electric apartment in the Albany area. His business had the honor of renovating several New York State historical buildings throughout the Capital District.  Dick served as a Supply Sergeant in the US Army during the Korean War. He was co-founder of the Delmar Boy Scouts Troop 250. In his free time he enjoyed worldwide traveling, boating, fishing, and skiing in Vermont as well as playing tennis with friends and family. He was known for his wisdom, respect of others, kindness and most of all humility and dignity.

Special thanks to all of those who loved Richard at the Daughters of Sarah and the Teresian House.  An additional thank you to the staff of Albany Medical Center, St. Peter’s Hospital and the Hospice Inn at St. Peter’s.  Their kindness, strength and compassion will always be remembered and appreciated.

Calling hours will be at Applebee Funeral Home in Delmar, NY on Sunday, November 3rd from  3:00 to 6:00 PM.  A mass of Christian Burial celebration will be on Monday, November 4th at 10:30 AM at Siena College’s Saint Mary of the Angels Chapel, in Loudonville, NY.  Internment will be at the Gerald B. H. Solomon Saratoga National Cemetery in Schuylerville, NY.  In lieu of flowers, donations may be made to the Fisher House in Albany, NY (https://www.fisherhouse.org).