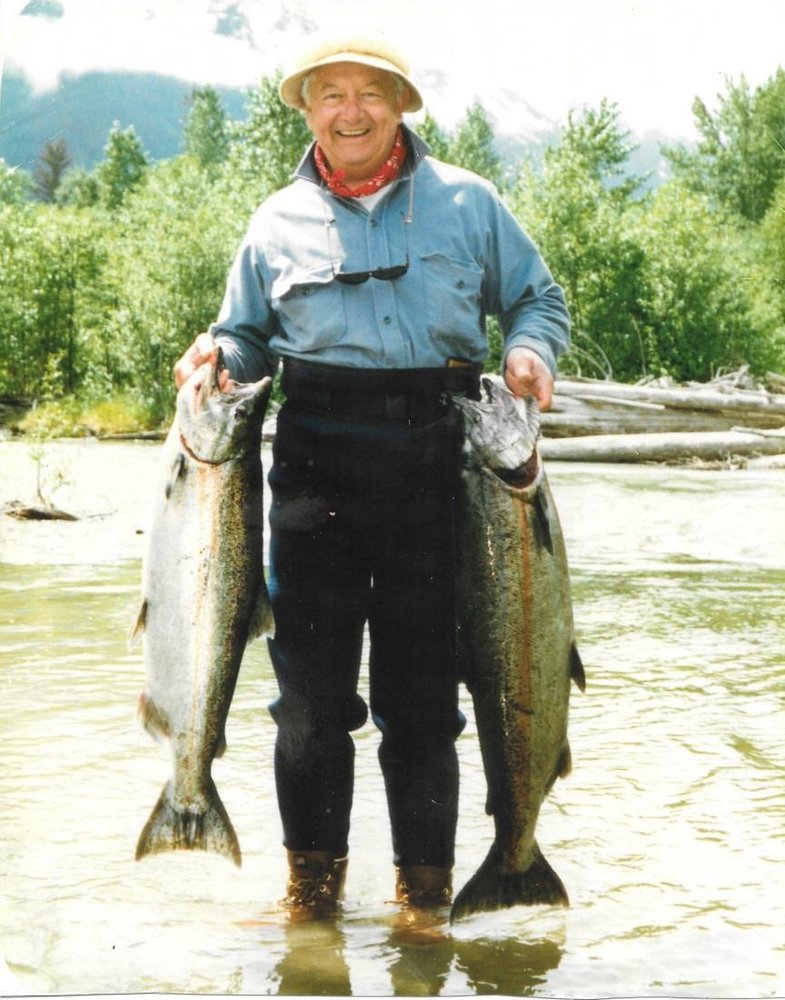 DELMAR - On April 28, 2019, Pete left the fishing that he loved here on earth, to join the fishers of men in Heaven. Born on July 19, 1929 to Joseph and Harriet Pietrykowski, Pete lived his early years in Toledo,Ohio. He enlisted in the Air Force in 1950 during the Korean War and was stationed in England as a cryptographer. During his time there he played for and coached the London Rockets in the American Military Football League. He proudly brought the team to their first championship game at Wembley Stadium.

After his time in the service he returned to Ohio where he met his wife of 61 years, Virginia “Ginger” Rogers. They resided in Toledo and Grosse Pointe, Michigan until 1970, when Pete and Ginger moved to Delmar, NY to raise their 5 children. Pete was the owner of Zimmer-Pete, the local distributorship for Zimmer Inc., an orthopedic implant company. His keen ability to observe situations and relate to people led to his enduring success. He retired in 1992. Over the years, Pete enjoyed sharing his many stories and no audience was too small. He loved a good joke, enjoyed traveling, wine, cooking and entertaining, but one of his favorite things was to have a cold Yuengling and raw oysters. Pete had a large personality and a generous heart and seldom missed an opportunity to make other people’s lives easier.

While most of Pete’s life was measured by his love for his family and his work, he was truly passionate about being in the outdoors hunting and fishing. The bounty of game and the love for the land was shared with family and friends. Pete held two International Game Fishing Association records, one for Sailfish on light tackle and one for Halibut on a fly rod. He never missed a day that he could be in the woods or on the water, especially duck hunting and fly fishing. In his later years, Pete shared most of his outdoor adventures with his grandson Travis, always his capable guide, to the waters of Lake Lonely and the woods of Otsego County where he proudly got two deer at age 87. Those were some of his fondest memories.

Pete was predeceased by his brother Robert at age 92 in 2018 and his eldest brother Anthony in 1984. He is survived by his wife Ginger and their 5 children: Carl (Earnie) Pietrykowski of Lakeport, NY, Mary (Jon) Edgington of Milford, NY, Susan Jacobsen of Delmar, Michael Pietrykowski (Suzanne) of Guilderland and Ann (Nick) DiBiase of Delmar. He is also survived by 17 grandchildren and 10 great-grandchildren.

Friends and relatives are invited to join the family at Applebee Funeral Home, 403 Kenwood Ave. in Delmar on Thursday, May 9, from 4 to 7 p.m. A mass in remembrance of Pete’s life will be held at St. Thomas the Apostle Church, 35 Adams Place, Delmar on Friday, May 10 at 10 a.m.

Consistent with how Pete lived, he chose to donate his body to The Albany Medical College Anatomical Gift Program for the purpose of continuing education and research. The family would like to thank the providers from The Town of Bethlehem Senior Services, Landmark, Concepts of Health Care, and the Hospice Care Team for all their valued help and support. In lieu of flowers, the family would ask that contributions be made in Pete’s name to the Community Hospice of Albany County - The Community Hospice Foundation Gift Processing Center 310 S. Manning Blvd. Albany, NY 12208  or www.communityhospice.org/donate.

To send flowers to the family of Carl Pietrykowski, please visit Tribute Store
Print
Thursday
9
May