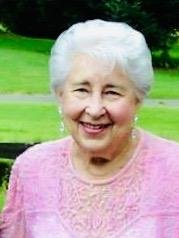 DELMAR – Lenore Elizabeth Smith, 93, passed away on Tuesday, April 30, 2019 at the Eddy Village Green in Cohoes.

Lenore was born in Orwell, VT on January 7, 1926, the oldest child of Owen C. and Maude (Blackmer) Balcom.  She grew up in Vermont and graduated from Brandon High School.   On June 14, 1947 she married Robert J. Smith.  They settled in Delmar where they raised their family.  Lenore worked for New York State.  Upon retiring in 1981, Bob and Lenore moved to Florida.  Lenore started a second career with the Palm Beach School District. She worked there for over 20 years as a classroom aide.  In January of 2015 Lenore moved back to Delmar to be closer to family.

Throughout her life Lenore was an active member of the Order of the Eastern Star, Daughters of the Nile and American Legion Auxiliary.  She was a founding member of Jupiter First Church in Jupiter, FL.

Lenore was a woman of faith and integrity. She was a loving mother and had a network of friends. She read the paper every day and always finished by doing the Jumble. Lenore enjoyed watching golf on TV and was always ready for a game of Scrabble. She was known for her ability to remember special occasions by sending cards.

In addition to her parents, she was predeceased by her husband Robert on November 27, 1991; a sister, Muriel Paradis; and two brothers, Charles and Roy Balcom.

Survivors include a daughter, Bette Drobner (Kevin); a son, John Smith (Michelle); a sister, Iola McCullough; grandsons, Robert Smith (Alyssa) and Jeff Smith; and great granddaughter, Emmerson Lila Smith.  The family would like to thank the staff of House 14 at Eddy Village Green for their compassionate care and support

Relatives and friends are invited to call on Tuesday, May 7 from 4 to 7 pm at the Applebee Funeral Home, 403 Kenwood Ave., Delmar.  Burial will be in Florida at a later date.  In lieu of flowers, memorial contributions may be made to Shriners Hospitals for Children, Attn: Office of Development, 2900 N. Rocky Point Dr., Tampa, FL 33607 or Jupiter First Church, 1475 Indian Creek Parkway, Jupiter, FL  33458.

To send flowers to the family or plant a tree in memory of Lenore Smith, please visit Tribute Store
Print
Tuesday
7
May