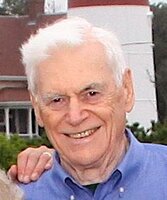 David was born and raised on a dairy farm in Poolville, NY at the start of the Great Depression.  His family did not have much but there was a lot of love and encouragement especially surrounding the importance of education.  David and all his siblings were encouraged to pursue their dreams through education and service, even if that meant living far from home.  David enlisted in the Army in 1948 and spent 5 years serving our country of which he was extremely proud.  He was deployed to Korea in 1951 and served as 1st Lieutenant, surviving many tours of combat.  David had a very strong faith and although he rarely spoke of his time in Korea, he did say often that there are no atheists in foxholes.

In 1955 David married the love of his life, Virginia Ann Smith.  They were married for 65 years.  David regularly told the story of how they met as teenagers at a band concert in Earlville NY and how he looked her up again when he was in the Army and stationed on Long Island.  He truly believed that God had placed Virginia in his life to be his soulmate and companion on all life’s adventures.  David used the GI Bill to earn his degree in Petroleum Engineering from the University of Pittsburgh and eventually earned his MBA from New York University in 1968.  He began working for Exxon Mobil in 1955 as a petroleum engineer, a career that would take him and Virginia to live in the jungles of Venezuala and the suburbs of Paris with their four young children in tow.  David oversaw oil and gas exploration and production in northern Africa while stationed in Paris.  In 1969 they moved to Wilton, CT and in the early 1970s David formed his own consulting company, Petro Enterprises, which he ran until 1999 when he retired.

David loved sports, both as an athlete and spectator.   He was a lifelong New York Yankee fan and loved going to the Stadium in NYC and also, once they retired, with Virginia to Yankee spring training games in Florida.  David was also an outdoorsman and avid hunter, and especially enjoyed sharing these outings with his brother Rich.

David was a wonderful father.  Dad encouraged all his kids to pursue our dreams whether it was education, travel, or sports.  He was always encouraging and supportive.  As a beloved grandpa to his nine grandkids, he was the best.  He loved each grandchild with his whole heart and was always so happy to be surrounded by his big, energetic crew.

At the end of his long life, David was so grateful to God for all the joys he was given and often wondered how he got so lucky, especially when reflecting on his beloved wife Virginia.  We are all comforted in knowing that they are together again in Heaven.

The family would like to thank all the staff at Kingsway Arms Nursing Center, and a special thank you to Ann Marie Robinson for her loving care of David during the pandemic when family could not visit.

Relatives and friends are invited to call on Tuesday, November 22 from 4 to 6 pm at Applebee Funeral Home in Delmar.  A Funeral Mass will be celebrated on Wednesday, November 23 at 9:30 am at St. Pius X Church in Loudonville, NY followed by burial at Saratoga National Cemetery.

In lieu of flowers, donations in Memory of David may be made to:
Fiver Children's Foundation