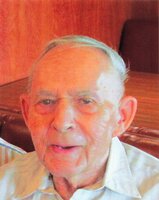 Kenneth P. Hahn went to meet his Savior on July 18, 2022 after having lived a rewarding life with his beloved wife Patricia.

Life began January 28, 1928, as the son of Ada (Murphy) and John G. Hahn of Cambridge, NY.  Ken graduated from Cambridge Central School in 1945 where upon he entered military service in 1946 as a paratrooper in the 82nd Airborne Division.  After serving 18 months, he traveled to Detroit, Michigan to help build cars for Chrysler Corp.  Returning home, Ken entered Albany Business College for two years.  Upon graduation, he discovered and married Patricia A. Barringer on June 25, 1955.  They promptly purchased a new home in North Bethlehem and two years later, babies commenced to arrive.  First there was Valerie and eight years later, Kimberly.

Ken became a community activist and led the drives to bring public water and sewer systems to North Bethlehem.  While doing so, he gave 40 years of this life to his town as a Republican Committeeman.  He also served as secretary to the North Bethlehem Fire Dept.  Seeking to do still more, he ran for and was elected Receiver of Taxes for eight four-year terms.  Retiring in 1996, he and Pat traveled extensively overseas to 22 different countries.  Wanting to remain active physically, he drove cars for 15 years for Hertz Rent-A-Car which allowed him and Pat to pursue his favorite sport of drum and bugle corps, which kept them both young at heart.  The two children that blessed their marriage went on to form their own families.

In addition to his wife Patricia, Ken is survived by his daughter, Valerie Kellerman (Norman) of Arizona and grandchildren, Erika (James) and their son James IV of Tennessee; and Shawn (Samantha) and their children Shayne and Scarlet of Arizona; and his daughter, Kimberly Spiro and grandchildren, Arielle and Samuel Spiro of Colonie.  He is also survived by his brother, Theodore (Barbara) Hahn of Halfmoon.  Ken was predeceased by a brother, John (Charlotte), brother, Harvey and sister, Verna Hahn.

Relatives and friends are invited to call on Sunday, July 24th from 2 to 4 pm at Applebee Funeral Home, 403 Kenwood Ave., Delmar.  Burial with military honors will be held at 1:30 pm on Monday, July 25th at Saratoga National Cemetery, Schuylerville.  In lieu of flowers, contributions may be made to the North Bethlehem Fire Dept., 589 Russell Rd., Albany, NY  12203.