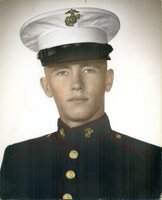 Norman honorably served his country in the U.S. Marine Corps from 1960 to 1964.  He retired from the Golub Corporation where he worked as a truck driver for over 20 years.  Later he was a crossing guard for the Bethlehem Central School District.

He is survived by his wife of 60 years, Marion; and his three sons, Norman III, Charles and Carl.  He was the beloved grandfather to four grandchildren and fondly known as “The Great” or sometimes “The Grape” to his six great grandchildren.

Relatives and friends are invited to call on Saturday, July 2 from 12 to 2 pm at Applebee Funeral Home, Delmar.  A service will follow at 2 pm.  In lieu of flowers, donations may be made to the American Lung Association, 418 Broadway, Albany, NY 12207.