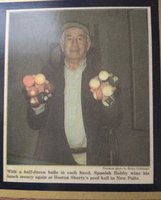 Robert "Bobby" Cartagena, 88, passed away in his home on January 11, 2021 in Delmar, NY due to heart failure. Born on June 8, 1932, he grew up in Orocovis Puerto Rico, and moved to the Bronx as a 17 year old. Bobby served in the Army during the Korean War, and subsequently was stationed in Japan. After coming home from the service, Bobby engaged in one of his life’s true passions; playing pool. For many years, Bobby, who went by the name “Spanish Bobby,” made a living playing and wagering on pool games, with a particular emphasis on the games of “one-pocket” and “8-ball,” though he was proficient in any game. See Brian Hollander, “Pool is an old-new hobby for Spanish Bobby”, Daily Freeman, November 22, 1998. During his career, he played with prominent players such as; Boston Shorty, Jersey Red, Johnny Evrolino, Richie Ambrose, and Brooklyn Sam. Id. He also opened and ran several pool halls in the Bronx in the sixties. Subsequently, he entered the Latin music industry, where he eventually opened and ran “Disco Mania,” a wholesale and retail record/tape/cd store, located in Manhattan on 162nd Street and Broadway, for 23 years. As for hobbies, Bobby enjoyed watching sports (especially boxing and the New York Mets), playing poker, and discussing politics (his favorite president was Harry Truman, and he was especially pleased to vote in the last presidential election). Bobby was survived and predeceased by many relatives and loved ones. He believed in being as cautious as possible related to health matters, but believed that people should take big risks to follow their life goals. Out of caution for his family and loved ones and so that people from all over can participate, services will be held virtually and information will be forthcoming. You may donate to the Hispanic Federation Puerto Rico Relief & Recovery Fund in his honor (https://hispanicfederation.org/donate/) or buy a lotto ticket because, as he often reminded people, every now and then in life, you win big.