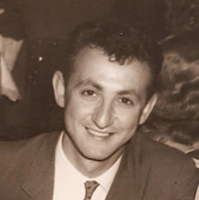 NATICK, MA - Joseph Mantaro, formerly of Delmar, New York, passed away on November 9th after a short illness. He served in the Navy honorably from 1951 to 1955, and graduated from Le Moyne College in 1959. He spent his career in the New York State Public Service Commission until he retired in 1993. He was an accomplished painter and wood carver. His imaginative Halloween pumpkins delighted neighborhood children each year. He was an avid fisherman who loved the Adirondacks and had a passion for history. He tended a large vegetable garden for many years and delighted in sharing its bounty with neighbors. He was renowned for his kind and loving nature, and he made life better for everyone around him. Joe was a devoted husband, father, and grandfather. He is survived by his wife of 60 years, Mary (nee McKee), and his three children: Matthew, Mark, and Jessica, along with their spouses Audrey Charles, Lisa Mantaro, and Danielle Newland. He was predeceased by his brother Tony, and survived by his sister Carmella and younger brother John. He will be missed by his grandchildren: Michaela Mantaro, Megan Mantaro, Emily Mantaro, Ethan Mantaro, Jack Mantaro, Kate Mantaro, Charlotte Newland, and Nicholas Mantaro. The family has no plans for a service at this time. A celebration of his life will be held at a time when we can all safely gather.