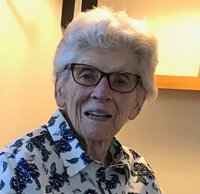 Willa Hellwig Jackson, 90, formerly of Ravena and Auburn, NY, died Saturday, September 12, 2020 surrounded by her daughters. Willa was born on February 20, 1930 to John and Theresa Hellwig of Elsmere, NY. She attended Bethlehem schools and graduated from Albany Teachers College. Throughout her life, she was employed at Ravena Free Library, Court Clerk for the Town of Coeymans, Cayuga Counseling Services and Cayuga County. Willa had a strong work ethic, not retiring until she was 75. Willa was a ‘jane of all trades’, enjoying baking, gardening, decorating, and sewing her daughter's clothing. She was especially proud of her thin pie crusts and Concord grape jelly. She doted on the various cats and dogs the family adopted throughout her life. She was fun to be around enjoying many laughs with her grandchildren. Willa was predeceased by her husband, Richard Jackson. She is survived by her daughters, Pamela Jackson of Fiddletown, CA, Theresa Jackson of Castleton, Julie Jackson of Coxsackie, and Christine (Darren) Miller of Saratoga Springs; grandchildren Kellen Nugent, Christine Jackson, Tate and Georgia Miller; her sister, Tanya Mitchell of Elsmere; and various nieces and nephews. The family would like to express their gratitude to the staff of Columbia Memorial Hospital for their compassionate care of Willa in her final days. Calling hours will be on Tuesday, September 15 from 4 to 6 pm at Applebee Funeral Home in Delmar NY. Interment will be at Memory Gardens Cemetery in Colonie on Wednesday, September 16. In lieu of flowers, please consider a donation in Willa’s memory to the charity of your choice.