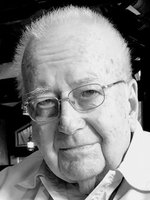 William “Bill” Schraa III, 90, died August 11, 2020 in Albany NY. Born November 8, 1929 in Albany, NY, he was the son of the late William Schraa, Jr. and Kathryn E. Pfaff Schraa. A lifelong resident of Delmar, he was educated in the Bethlehem Central School District, Clarkson and Siena Colleges. After service in the US Army during the Korean War, he became a land surveyor for Edward W. Boutelle & Son in Delmar, where he was employed for 40 years. This was followed by employment in the Town of Bethlehem Engineering Department until his retirement in 1996. Bill was a very active, lifelong member of St. Stephen’s Episcopal Church of Delmar, NY. He served as a Sunday School teacher, Youth leader, Lay Eucharistic Minister, Vestryman for 12 years, Clerk of the vestry for 12 years, Warden for 18 years, Assistant Treasurer for 11 years and Treasurer for 14 years. Bill was a member of the N. A. Blanchard American Legion Post 1040, Bethlehem Second Milers, Bethlehem Masonic Lodge No.85, F&AM, a volunteer with Cub Scouts, Bethlehem Tomboys and Town of Bethlehem Senior Services. He was also a charter member, director and officer of Eastern New York Society of Land Surveyors, as well as charter and Honorary Member of New York State Association of Professional Land Surveyors. Married for over 42 years to the late Elizabeth “Liz” Ann Tulley of Theresa NY (Jefferson County) who died in 1998. Bill was also predeceased by a son, Jeffrey A. Schraa (Diane Hansen of Elbridge, NY) and a daughter, Kathryn A. Calvagno (Anthony) of Delmar. He is survived by three beloved grandchildren: Tera Schraa Barger (Bryon) of Glenmont, Amanda Calvagno Catalfamo (Dominic) of Middletown, Del. and Shawn Calvagno (Kimberly) of Lino Lakes MN and great-grandchildren David Barger, Anthony and Lillian Catalfamo and Reese Calvagno. A memorial service for his immediate family only will be held at 10 AM Friday August 14, 2020 at St. Stephen’s Episcopal Church, followed by an inurnment in the church’s, Elizabeth A. Schraa Memorial Columbarium. The service may be viewed on Facebook Live. The link is available on the church website: ststephensdelmar.org In remembrance of Bill, those that wish, may make contributions to St. Stephen’s Church Memorial Fund or The American Cancer Society. Special thanks to the thoughtful compassionate staff at Our Lady Of Mercy Life Center, and St Peter’s Hospital especially the ER & 5th Floor McCauley.